At the start, this connection of Othello and a primary school in the 1970s seemed inspired. By the end I was just really frustrated by it. 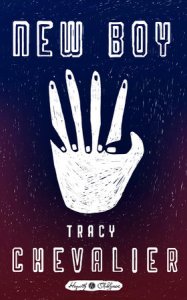 New boy Osei, from Ghana, arrives at a Washington DC primary school late in the year.

It is 1975 and he’s the only black kid in sight. His connection with popular girl Dee is immediate – they bond, standing against the suspicions, envy and curiosity of the rest of the schoolyard.

But Ian is watching very carefully, and looking for an advantage.

Casper, secure as the most popular boy, is friendly, while Mimi and Blanca wait on the fringes. Over the course of this one day, early sunshine descends into tragedy – misunderstandings, evil machinations, racism, and love all play their part.

A central motif is a pink, strawberry-embossed pencil case – it belongs to Osei’s sister, he gives it to Dee, and she misplaces it, allowing it to become a powerful pawn in a much bigger game.

Shakespeare fans may already get some of the references, for this is Othello transformed as part of the Hogarth Shakespeare series.

On the plus side, the intense tragedy of this story translates surprisingly effectively into the squabbling of these 11-year-olds, and Chevalier has a highly readable style.

But I was left thinking less of the original play – it lost some of its grand tragedy in the shift to childish players. The grandeur of the language in Shakespeare’s original lifts the story above some of its sillier elements.

And while 11-year-olds might be this sexualised in 2017, they weren’t in 1975. This is something that probably wouldn’t matter to a younger audience (that is, younger than 45 or 50), who have no way of knowing that it was ever different. I can’t know if this is how Chevalier remembers it, or whether she did this as a way of connecting with a younger audience.

A good read, though it felt like it took a long time to get going.

Nicky Starling, 8, loves his family, even if (secretly) he doesn’t share his dad’s passion for Hawthorn Football Club.

It’s 1985, the season is just beginning, and nothing less than the premiership cup – his holy grail – will be good enough.

But Nicky’s keener on that other holy grail, the one that occupies the minds and hearts of King Arthur and his legendary nights.

Or perhaps Shakespeare will do just as well, as Nicky repurposes his own action figures and his sister’s discarded dolls to act out his own versions of these great stories.

But behind the scenes, Nicky’s family is falling apart. Secrets, lies, illicit romance, an affair and a family death all pull at the ties that have bound this family together.

Nicky’s innocent observations of what he hears and sees one by one set off detonations way beyond his understanding, affecting his parents, grandfather, sister Pippa, and his grandmother’s nurse, Rose, whom he adores.

Sydney-based Kelly, recently appointed editor of Mumbrella, has a readable style and Nicky makes for an entertaining narrator. His pastiche plays, rewriting Shakespeare and King Arthur, are often hilarious, though there are quite a lot of them, and I’m not sure they were all needed.

The story takes a while to get going, but the scene-setting Kelly does makes each of the later revelations more powerful.

It’s one of the great adventure stories, and this is a good introduction for all ages.

Captain Robert Falcon Scott’s hunt for the South Pole is one of the great, tragic stories of exploration and adventure.

From the day his ship, the Terra Nova, left New Zealand on November 26, 1910, to his death after encountering temperatures of  -40C, it was a tale both of extraordinary achievement and suffering.

Serious scientific research accompanied Scott’s aim of being the first to the South Pole, but he was beaten in that international race by Norwegian Roald Amundsen’s group by just a few weeks.

On his journey back to base, his small group encountered unexpectedly severe weather, and failed by just 11 miles to get to their next food source, only a relatively short distance from base.

It was an extraordinary trip, in circumstances that are almost impossible to imagine.

Grochowicz tells the story simply and vividly, giving life to the crew and fellow explorers who went with Scott so far into those appalling conditions, with just the support of a bunch of long-suffering ponies and sled dogs.

This is a great entry into what is a truly epic story, with a great collection of photographs.

And then go find a copy of Scott’s Last Expedition: The Personal Journals of Captain R.F. Scott – still widely available more than a century after publication in 1913 – for what is the incredible first-hand account.

Australian writer Fiona McFarlane has just won the world’s richest literary prize for young writers, The Dylan Thomas Prize, for her second book, a collection of short stories. This was her first, and it was fabulous.

Ruth wakes in the night at her seaside home certain there’s a tiger in the house, prowling through her lounge room.

By the time she tells her son her fears over the phone, she realises she just sounds old and confused.

Then Frida arrives, sent by the government, she says, to care for Ruth. What starts as an hour a day of cleaning and personal help gradually encroaches on Ruth’s whole life.

She’s worried at times at what Frida is doing, but also grateful. How would she get by without her large, sometimes fierce, carer? Particularly when the tiger comes again.

As Ruth becomes less certain about the things she thought she knew, her childhood life in Fiji becomes more real and old memories come flooding back.

She makes contact with her youthful crush, a doctor, and the flame is kindled again.

But what is Frida really up to, and can she be trusted?

This startling debut novel from Sydney-based McFarlane is a disturbing and unsettling slow burn of a psychological thriller about love and dependence.

McFarlane places the reader claustrophobically inside Ruth’s increasing confusion, so we can see and fear what’s coming but can’t do anything about it.

The book has already sold around the world.

Update in 2017: The Night Guest ended up being shortlisted for the Miles Franklin in 2014 and for the Guardian first book award in the UK. It also won the inaugural Voss Literary prize.

Her new book is titled the The High Places.

Sweet and a little dark. An enjoyable piece of fluff, with the great plus of featuring love and friendship among mature adults. 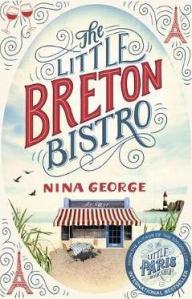 Marianne, at 60, is stuck in a loveless, cold, and lifeless marriage.

Frustrated and depressed, she decides she’s had enough, and plans to end her life in the Seine.

But her suicide attempt doesn’t go as she hoped, and the hospital she finds herself in is even worse for her state of mind. She walks out, heading for the sea, and for the chance to do it right this time.

But life – and a certain Breton magic – intervenes.

She finds a town in Brittany that has a little bistro by the sea, and a desperate need for some of her skills.

Bit by bit, as she works and gets to know the locals, Marianne finds purpose and happiness – and discovers that she can start finally to remember who she is, and what she is capable of. And perhaps that might even mean love, finally.

But, having had her attentions for 41 years of marriage, her husband isn’t ready to be forgotten quite so easily.

Though this is somewhat darker than her previous novel – the international best-seller The Little Paris Bookshop – George looks likely to have another hit here.

It’s part of its undeniable charm that the romance that infuses the whole is focused on mature citizens well past their first blush of youth. Corinna Hente

This book was published in April 2017. This review will appear in the Herald Sun’s Weekend magazine.

This is one of the strangest books I’ve read. I’m still not entirely sure what I think of it, except that I couldn’t put it down. 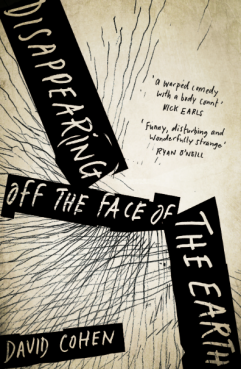 Ken Guy runs a storage facility on the fringes of Brisbane, and he’s feeling quite hopeful.

After a bit of a checkered work and life history, it seems things might be starting to go his way. Business is steady, and he’s in the promising early stages of a relationship, with someone he really likes.

But just down the road, Pharoah’s Tomb Self Storage – a national chain that could put him out of business – is starting construction of a new facility.

And Bruce – a former work colleague who got him involved in some dodgy practices in the past – reappears in his life.

At the start it seems like he’s a useful addition, but strange things start to happen, often at odd times of the night.

People are disappearing, and the one thing that connects them is his storage facility. And why are there so many flickering florescent lights everywhere?

Described as a “surprisingly funny study of physical and mental deterioration”, Disappearing Off The Face Of The Earth is one of the oddest books I’ve read.

It is funny at times, engrossing throughout, and really quite disturbing. This is Brisbane writer David Cohen’s second novel.

This book was published in May 2017

Amazing book from one of Australia’s best writers.

Benedict Orion comes home from boarding school – excited to get away from books and into the everyday work of the family farm – to find his parents dead in a murder-suicide.

In deep shock, he retreats, unable anymore to step foot into the home he loved. He finds refuge in the barn, in close quarters with the old mare Melba, and the young feisty stallion Fell.

His neighbours in Wahrheit, a close-knit Germanic religious farming community in South Australia, are patiently waiting for the second coming of the Messiah.

Benedict – now living in the barn, never leaving the farm – remains withdrawn from the horrors of the past or thoughts of the future, existing solely through the horses and the needs of the farm and the passing seasons.

Wahrheit’s pastor keeps watch, visiting and bringing food from the community, seeing the gawky teenager slowly rediscover himself. But there are other pressures building in Wahrheit, and the pastor has to find his own way through doubts and trauma.

Hornung won the Prime Minister’s Literary Award for her last book, Dog Boy, which explored some similar territory in the close bonds between boy and animal.

Full of symbolism but not overwhelmed by it, this is a powerful and wonderful book, and the writing is mesmerising. Corinna Hente

This book was published in May 2017